In general, atrial fibrillation is considered to be the most common cardiac arrhythmia[52]. It is clinically important as patients diagnosed with atrial fibrillation are at higher risk for heart failure, and therefore compromised hemodynamics. Atrial fibrillation itself disrupts cerebral circulation leading to cognitive decline and dementia[53-55]. Finally, atrial fibrillation has been linked to all dementia types in previous studies. However, there is a lack of research evidence linking other common types of arrhythmia among the elderly. Namely, sinus bradycardia and sick sinus syndrome to the development of Alzheimer’s disease have not been examined. Sinus bradycardia may result in decreased cerebral blood flow and cerebral dysfunction[58-61]. Sick sinus syndrome is relatively rare condition which mostly affects the elderly. Similar to other types of arrhythmia, this syndrome can compromise normal hemodynamics possibly leading to disrupted cerebral blood flow.

In addition, both sick sinus syndrome and sinus bradycardia may produce episodes of hypotension and decreased cerebral blood flow velocity which, in turn, may result in increased blood viscosity and increased rouleaux formation (implications will be considered in the next chapter). On the other hand, hypotension induced by arrhythmias may lead to cerebral hypoperfusion[62].

One way to estimate how many people are affected by this disease is to look at the large hospital discharge data which can be derived from the Healthcare Cost and Utilization Project Nationwide Inpatient Sample. The Nationwide Inpatient Sample contains a national all-payer data set with 7.45 million uniform hospital discharge abstracts for all inpatient stays in 2001. The detailed description of the data is available from http://www.hcup-us.ahrq.gov/db/nation/nis/Overview_of_NIS_2001_25Jul03.pdf. The important feature of this data is the availability of ICD-9-CM diagnosis codes. Other variables of interest include types and sources of admission, primary and secondary sources of payment and various patient-level characteristics. Using ICD-9-CM methodology, we calculated that there were 1,080 (0.015%) patients discharged with both sick sinus syndrome and Alzheimer’s disease and 2,760 (0.037%) patients discharged with both sinus bradycardia and Alzheimer’s disease in 2001. 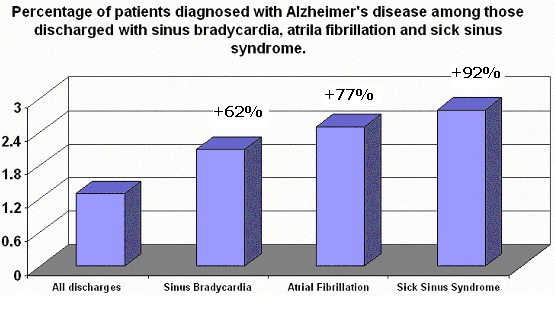